Since 2014 Ukraine introduced multiple critical changes to the «rules of the game» in the economy and society. They serve to level off the playing field and enhance competition, which in its turn raises efficiency. While adopting the laws has not been always easy, the hardest part — implementation of changes — mostly lies ahead. It requires not only proverbial «political will» but professionalism, integrity and institutional capacity.

Unfortunately, as the experience of many countries, including Ukraine, shows, no change is irreversible. Slipping into a vicious circle of “bad policies – economic downturn – even worse policies” is always a possibility. Compared to some areas that have undergone sweeping changes, Ukrainian politics remains surprisingly intact. Changing it requires consistent and committed involvement of the society, particularly its most active part – the business and NGOs, – into politics at different levels. This may range from episodic participation in discussions of government plans or watchdog initiatives to running for [elected or appointed] positions within the government, supporting candidates or parties, publicly speaking in favour or against certain policies etc.

In this paper we reconcile the major reforms emphasizing those that have been implemented or started during 2017-2018. Then, we discuss risks and challenges that Ukraine faces — both global and specific for our country. 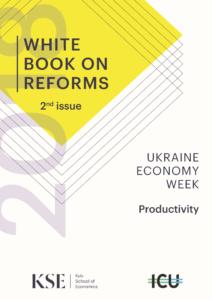 Rector at the KSE University, Head of Sociological Research, Vice President for International Relations at KSE

Chairman of International Academic Board at KSE, professor at University of California, Berkeley

Dean of the Faculty of the Graduate Economics Studies, Assistant Professor, Associated Member of the Center for Food and Land Use Research

Professor at the Kyiv School of Economics, member of Ukrainian parliament