The hypothetical cessation of tobacco production in Ukraine will affect trade dynamics, both in terms of exports and imports. In the short term, most of the domestic demand for raw materials (USD 314 million in 2018) will disappear due to the production shutdown. On the other hand, the export volumes of cigarettes, cigars and cigarillos produced in Ukraine will decrease (total exports amounted to USD 341 million in 2018).

There the penetration rate of cigarette imports will increase (the ratio of imports to domestic consumption), which amounted to about 6.4% in 2018 (USD 51 million / USD 800 million).

According to the Tarde + experts, the maximum potential change in the trade balance will reach 0.55% of the GDP of Ukraine or 12% of the trade balance of goods and services in 2018. On the whole, the volume of potentially lost cigarette exports will be 0.72% of the total exports of goods from Ukraine, and the volume of potentially lost imports could reach 0.65% of total imports of goods to Ukraine.

Moreover, the effect on the economy and the state budget will be further enhanced by the drop of employment numbers, value added created by tobacco production and, as a result, reduction in excise duties (UAH 42 billion in 2018), corporate income tax, and personal income tax. 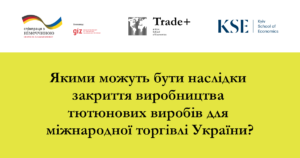