Exempting soybean and rapeseed exporters from VAT has a negative effect on the economy of $44.5-60.5 million per year. The implemented policy aimed to increase the processing of soybeans and rapeseed by Ukrainian plants. As a result, the processors received $ 26 million and the state budget gained $ 2-18 million. However, soybean farmers, mostly small and medium-sized, received $ 88.5 million in losses, far outweighing the benefits of processors and the state budget.

According to Trade+ and UaFoodTrade Project researchers, the main task of the state is not to support certain industries, but to create an environment where companies of any industry are able to develop, and markets reward successful and punish unsuccessful players without government involvement. 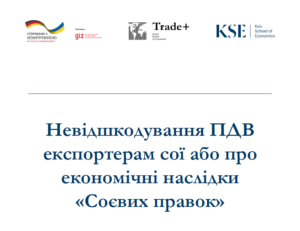 Vice President of Economic Education, Associated Member at the Center for Food and Land Use Research

Researcher at the Center for Food and Land Use Research