Markets in Focus for Ukrainian exports

In this research paper Trade+ experts analyzed Ukraine’s Export Strategy and analysed data regarding Ukraine’s trade with other countries as well as world trade data. As a result, we have identified a list of countries which display the highest potential for intensifying bilateral trade with Ukraine. Catching up with the estimated potential will lead to a significant increase in Ukrainian exports. The total amount of undertrade (the difference between potential export levels calculated through the gravity model and actual exports to a destination market) between Ukraine and these prospective markets amounts to $12.98 billions, which equals 179% of Ukraine’s total exports to these countries in 2017.

The list of the top twenty most promising destination markets is mostly in line with the list of markets in focus defined in the Export Strategy: countries like USA, Canada, 8 EU countries (Ireland, Sweden, Slovenia, Germany, Denmark, United Kingdom, Finland, France), other countries in Asia and Europe (Switzerland, Japan, China). However, the updated list also includes countries not featured in the Strategy – South Korea, Mexico, Qatar, Vietnam, Norway, Singapore and Hong Kong. 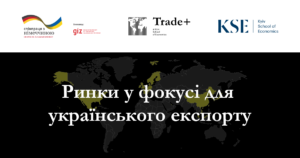