RF’s full scale war on Ukraine has been continuing since February 24, 2022 and its toll is already immense. More than 8 million Ukrainians are estimated to have been internally displaced, in addition to 6 mln who have left the country. Ukrainian economy is projected to contract by 45% and dozens of millions across the world are threatened with hunger because of the disrupted exports of grains from Ukraine and continued damage of its agri-food sector.

The Center for Food and Land Use Research at KSE and the Ministry of Agrarian Policy and Food of Ukraine launched the regular ‘Agricultural War Damages Review Ukraine’ to inform the wide audience and policy makers on the compensation and rehabilitation needs.

The indirect losses in agriculture due to production decrease, logistics disruption and lower prices for export-oriented commodities are estimated at $23.3 billion. USA.  It is stated in the analysis “Agricultural War Losses Review Ukraine. Rapid Loss Assessment”**, prepared by the team of the Center for Food Research and Land Use at KSE Institute (KSE Agrocenter)  in cooperation with the Ministry of Agrarian Policy and Food of Ukraine.

According to the previous report of the KSE Agrocenter, after three months of Russia’s full-scale war against Ukraine, the damage toll to Ukraine’s agriculture reached $4.3 billion, or nearly 15% of its capital stock. While damages reflect the destruction of tangible assets and inventories, the losses estimate the foregone revenue due to lower quantities of goods produced and additional costs the producers bear because of the war. The foregone revenue is the difference between the actual revenues and the revenues that could have been realized had there been no Russia’s invasion of Ukraine.

“Estimating losses is essential not only for understanding the magnitude of the downfall in the sector but for assessing the recovery needs as well. A substantial share of the foregone revenue was needed to cover the cost of the sowing campaign for crop producers or feed for livestock. Without a partial compensation for losses, farmers in the regions that suffered from the war would be unable to restart their production,” said Roman Neyter, an expert at the KSE Institute’s Center for Food and Land Use Research.

Indirect crop Losses due to lower output are $9.6 billion. The most significant drop in the estimated 2022 harvest is for wheat (expected 33% fall in the 2022 harvest, compared to the baseline), sunflower (32% fall), and barley (31% fall) since a substantial share of these crops is produced in the areas directly affected by the war. Compared to the previous year, a relatively less pronounced decrease in the 2022 harvest is expected for corn, i.e., 18% fall.

According to our estimates, the harvest for other annual crops in the 2022 calendar year is expected to be 22% lower compared to the 2021’s harvest, resulting in another $3.3 billion of losses.

Livestock losses are different from crop production, where we estimate the monetary value of losses for only one year of lower harvest. While you can replant and get a new harvest from annual crops within a year – a fall in the livestock leads to lower production for multiple years since recovering the livestock production will take longer. The total losses for the livestock sector are estimated at $682 million.

Perennial crop losses due to a lower output cost $89 millions. An estimated average time needed for replanted gardens to start bearing fruits is five years. Thus, the losses caused by five years of lower perennial output are estimated at $222.4 million.

One of the Russian invasion consequences is a decrease in the farm-gate prices for export-oriented commodities. Because of the port blockade and the limited opportunities to export through other modes of transport, Ukraine suffers from a domestic supply shock. It leads to a corresponding nearly 30% domestic price decrease. The combined value of losses for top-four export-oriented crops (wheat, corn, barley, sunflower) is 11.9 billion US dollars. 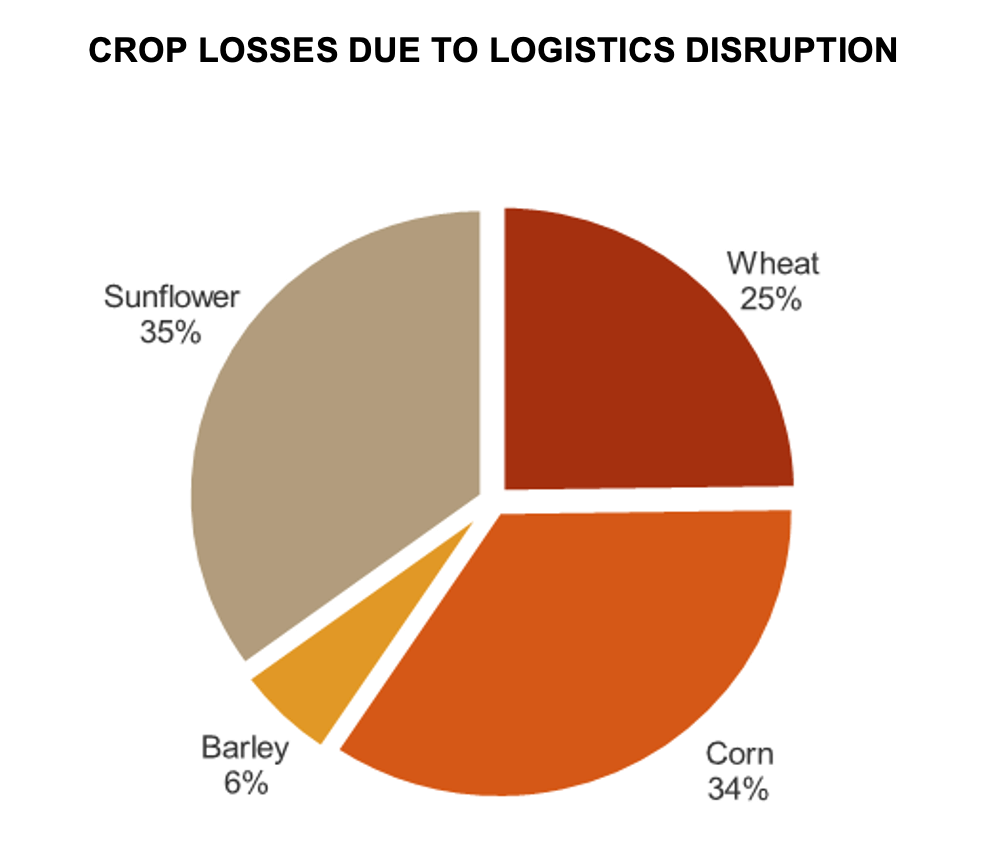 Supply disruptions also led to an increase in agricultural input prices, in particular for the key ones – fertilizers and fuel. Fertilizer costs have increased by 37% since the Russian invasion. The estimated 39 cents per liter of diesel increase in the fuel prices induced additional losses for Ukrainian agricultural producers. Losses due to higher production cost $859 million.

**The rapid agricultural losses assessment was conducted in accordance with the World Bank and FAO methodologies[1]. Similarly to the agricultural war damage assessment, we estimated the losses using the indirect method. We started with establishing a baseline scenario – what would the production be without the war. We used the production levels in the calendar year 2021 to set a baseline scenario – the production volume without any disruption caused by the Russian invasion. We then applied area-specific losses coefficients based on the supposed severity of the fall in production.

The full-scale Russian invasion of Ukraine caused damages to the agricultural sector of the country for the total amount of $4.29 billion.

“Russia’s aggression affects not only the ability to freely export our agricultural products and feed about 400 million people a year around the globe. Damage to land, infrastructure, and agricultural machinery directly affects the production of agricultural products in Ukraine. Without the restoration of lost assets, Ukraine will not be able to return to its place in global food security. Damage assessment is the first element in assessing the need for restoration,” said Roman Neyter, an expert at the KSE Institute’s Center for Food and Land Use Research. 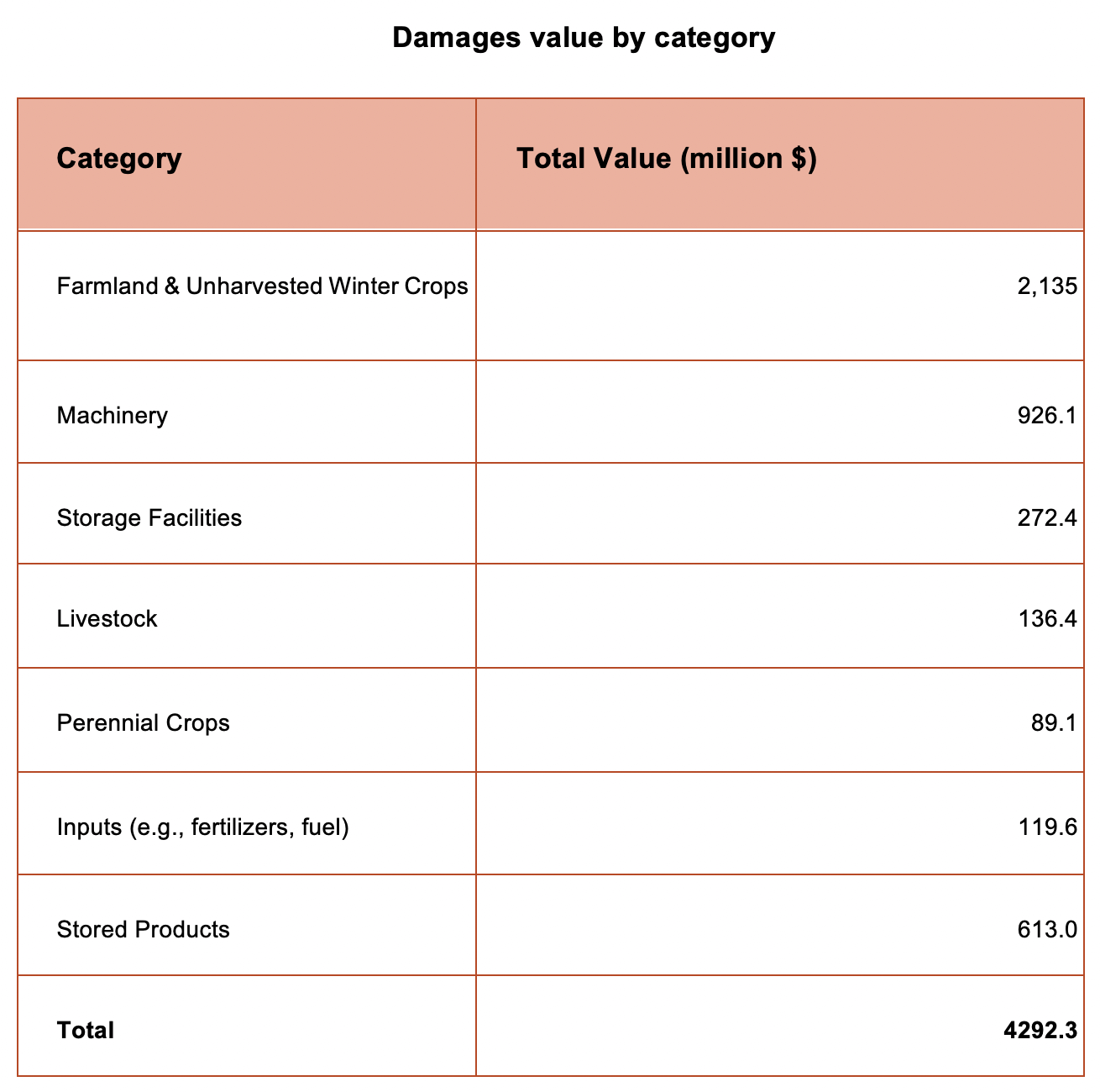 RF’s full-scale war on Ukraine leaves three months behind, and its toll is already immense. The Ukrainian economy is projected to contract by 45%, and dozens of millions worldwide are threatened with hunger because of the disrupted exports of grains from Ukraine and continued damage to its agri-food sector.

The largest damage category is damage to the farmland, including unharvested winter crops –  over $2.135 billion.  Agricultural land has been affected by two significant types of damage – mining pollution and direct physical damage. Apart from the minefields, areas which have been subjected to active hostilities are also polluted with unexploded ordnance. An estimated $436 million are needed to inspect lands with a high risk of mining pollution and demine the affected areas. The second type of damage is physical damage to the fertile soil layer, e.g., the craters from artillery shellings and missile strikes, damage caused by the tracks of tanks and other military vehicles.

Apart from the direct damage to the lands – the occupation, military actions, and mining pollution limit farmers’ access to the fields and opportunities to collect the harvest. It will result in unharvested winter crops across many of the war-affected areas. Approximately 2.4 million hectares of winter crops could be unharvested, resulting in $1.435 billion in damages.

The agricultural machinery and equipment are also being damaged by shellings, airstrikes, and battles taking place in close proximity. Tractors and trucks have a higher risk of being damaged than other types of farm equipment. They can be used not only for farming activities but also for war-related purposes, such as, for example, trenches digging, transportation, and logistics.

This increases the probability of farms being located in the active warzone and makes them targets for expropriation. The estimated cost of replacing and repairing the damaged machinery is $926.1 million.

RF is reportedly precisely targeting elevators and other storage facilities because these damages weaken Ukrainian agricultural capacity. Given that storage facilities are frequently located in the open area and provide an excellent sight of the surroundings – they as well suffer from direct military assaults to limit the enemy’s situational awareness. The general amount of damages due to the destruction of storage facilities is estimated at $272 million. 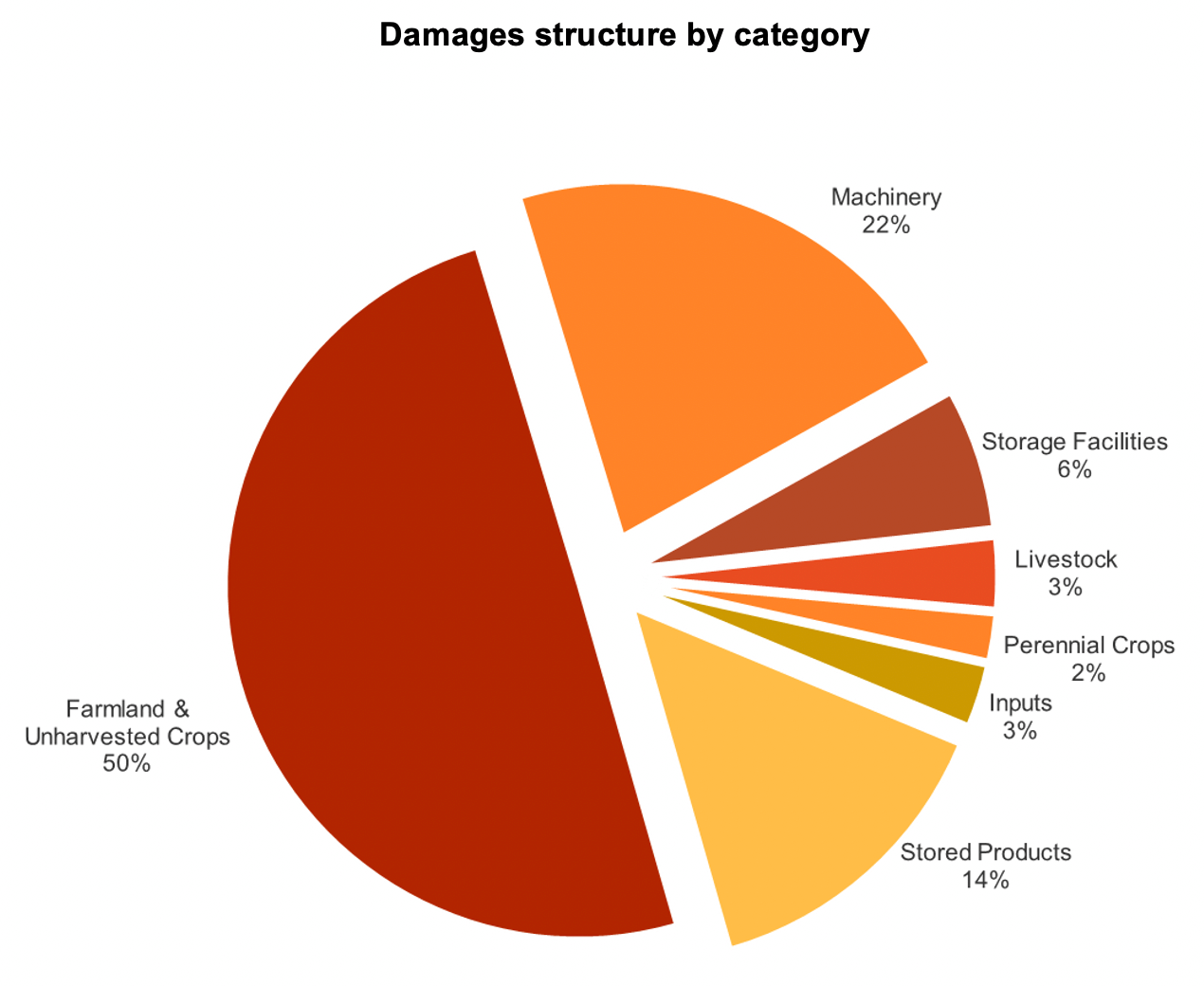 We base our estimates on the rapid damage assessment methodology compliant with the World Bank and FAO.

War damages are calculated as the monetary value of physical assets that are destroyed (and stolen) or partially damaged (but still suitable for repairing/recovery) due to military actions and occupation. The vital difference between the damages and losses is that damages reflect the destruction of tangible assets and inventories, while the losses accrue the foregone revenue from the unsown fields, lower yields, and higher production costs.

War damages are yet uncertain, for the war is not jet over. Therefore, in this report we rely on indirect methods by defining the overall areas directly affected by the war, establishing a baseline of the resources located on these territories before the RF’s invasion, and applying category-specific damage coefficients for each type of the damaged assets. The detailed description of the methodology is here.