How to increase and diversify Ukrainian exports to the United Arab Emirates?

In this study, Trade+ experts analyzed the current state of bilateral trade in goods and services between Ukraine and the United Arab Emirates (UAE), as well as ways to increase and diversify Ukrainian exports to the UAE, one of the largest exporters and trading centers in the region and the world. in the focus of Ukraine’s Export Strategy for 2017-2021. The identified “undertrade” between Ukraine and the UAE (the difference between the potential export calculated on the basis of the gravity model and the actual export) is $ 413 million in 2017, exceeding the actual exports from Ukraine to the UAE in the same year (USD 385 million).
According to the study results, a list of 135 goods (at the level of 4 trademarks) that are promising for export growth was determined to the UAE (these are goods in which Ukraine has demonstrated comparative advantages and estimated undertrade). The estimated undertrade for these promising goods is $ 73 million. Moreover, about 70% of these goods were not delivered to the UAE in 2017 at all. The highest undertrade was recorded for the products of mechanical engineering and electrical equipment. The use of estimated potential for certain promising commodity groups will significantly increase the volume of Ukrainian exports to the UAE. 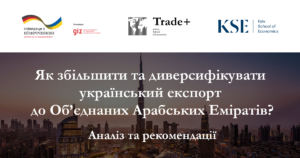