How to grow and diversify Ukrainian exports to Germany?

Ukraine and Germany are currently on different levels of economic development, yet both countries are very open to international trade and can gain additional value from the intensification of bilateral trade. At the same time, Ukrainian export to Germany is still insufficiently diversified, and its potential – not fully utilized.

Through data analysis, this research identifies the sectors of the German economy that are most dependent on imported goods and in which the Ukrainian manufacturer can find a niche. Also, the study identifies the most promising for exporting to Germany groups of Ukrainian products, which fall under the priority sectors defined by the Export Strategy. In addition, the goal of the Strategy to increase the export of technological and innovative products is taken into account. The export prospectiveness was also calculated for a wider range of product groups, without limiting the analysis with the Export Strategy framework.

Gravity model estimation reveals total “undertrade” (gap between actual and potential trade volumes) between Ukraine and Germany at $ 500 million in 2016, or 35% of total exports from Ukraine to Germany in the same year.

The assessment shows that tariffs are not a critical barrier for the identified promising goods. The “undertrade” could be thus explained by non-tariff measures, such as phyto-sanitary and technical barriers, or Ukrainian goods’ low competitiveness in comparison with other countries, or even different taste preferences of German consumers.

Read the full report prepared by the Foreign Trade Research Center Trade + at the Kyiv School of Economics with the support of the Deutsche Gesellschaft für Internationale Zusammenarbeit (GIZ) GmbH. 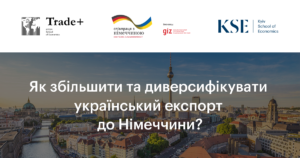