Notes on the gravity model

The gravity model is a worldwide recognized method of econometric analysis of foreign trade, in particular among researchers of such organizations as the World Bank, the IMF and the United Nations Conference on Trade and Development.

Learn more about the Gravity Model in an article prepared by Oleksandr Shepotylo, Senior Economist at Trade + 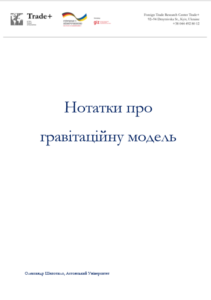