The New Agricultural Support System in Ukraine: Who Really Benefits?

The experts of the UaFoodTrade Project have analyzed the recently amended agricultural support system in Ukraine. The results are truly unexpected.

Agricultural support system in Ukraine has been in the process of constant change over the last 5 years. In 2018, the Government of Ukraine allocated a record UAH 6.3 billion of taxpayers’ money to agriculture in the form of various input subsidies. This has not been, however, accompanied with an evidence-based policy discussion, officially stated goals and justification for the support programs. In these circumstances it is virtually not possible to evaluate the efficiency of the support programs. Subsidies, however, always have unintended beneficiaries. In this note we discuss those beneficiaries and show that only a small share of the support ends up in the pockets of agricultural producers.

The agricultural support system has been constantly evolving over the last 5 years in Ukraine. Before 2017 it was mainly tax benefits that made up more than 90% of the total agricultural support. Tax benefits accrued from a so-called single tax (or Fixed Agricultural Tax before 2015 – FAT) and a special value-added tax regime in agriculture – AgVAT (World Bank, 2013).

The FAT is a flat rate tax that has replaced profit and land taxes. Its rate varies from 0.09% to 1.00% of the normative value of farmland, depending on farmland’s type and location. In 2010, the FAT resulted in an average tax payment of only roughly 0.75 US$/ha of arable land that left farm profits in Ukraine essentially untaxed. In 2015, due to a significant increase of the normative value of land, FAT liabilities increased to roughly $US9/ha, which is also very low compared to what the farmers would have paid under the general tax system.

According to the AgVAT regime, farmers were entitled to retain the VAT received from their sales to recover VAT on inputs and for other production purposes at the discretion of farmers. In 2016 and 2017, the AgVAT system was gradually eliminated under the pressure from the IMF and other international donors. In 2015, the benefits from the AgVAT were estimated at UAH 28 bn. The FAT or profit tax exemption is still in place and is expected to continue. Both tax benefits regimes were heavily criticized (see e.g. World Bank, 2013) and were found to be very cost-ineffective in what concerned stimulating agricultural productivity growth and undermining efficiency and productivity improvements in agriculture.

In 2017 the AgVAT tax benefit system was terminated and replaced by the so-called ‘quasi accumulation VAT’ regime. This was no longer a tax benefit system. Agricultural producers (mainly livestock and horticulture producers) were entitled instead to receive budget subsidies proportionally to the VAT transferred to the state budget. The total volume of the program was UAH 4 billion. The program was, though, heavily criticized as such that favored primarily large agriholdings.

In 2018, the volume of budget subsidies to agriculture increased to UAH 6.3 billion, while the eligibility and allocation criteria changed significantly as well. UAH 1 billion out of 6.3 billion was allocated specifically for small farmers (up to 500 ha of farm size). They can receive both grants (non-repayable) and repayable funding. This funding is distributed among the farmers on the competitive basis and is envisaged to compensate for the purchase of inputs in various forms (concession credits, partial compensation of costs of seeds etc).

The biggest share of budget subsidies, however, was allocated for livestock support, i.e. UAH 4 billion:

Another 300 million UAH is envisaged to support horticulture, i.e. planting of new gardens, vineyards, berry-fields and their cultivation. This program suggests the reimbursement of up to 80% of the cost of planting material, as well as the governmental support for planting new gardens, building laboratory facilities, freezing facilities and purchasing machinery.

All in all, the above programs could be summarized as the so-called input subsidies, i.e. subsidies that decrease the cost of inputs for the farmers. The main problem, however, is that the updated support programs were designed and implemented without an open and evidence-based discussion of the goals and instruments. This is the worst what can happen with such programs as there is no chance to evaluate the efficiency of the allocated taxpayers money whatsoever. But even if we assume that such programs were designed and implemented properly and sustainably, farmers turn out to be the least beneficiaries in case of input subsidies. There are always unintended beneficiaries in such programs, i.e. not every hryvnia of the money taxpayers pay to fund the subsidies ends up in the pockets of farmers, i. e. of the intended beneficiaries of the program. Below we discuss and evaluate this phenomenon (i.e. the distribution of the benefits of the programs to the subsidized) in more detail.

Farmers are not the only beneficiaries of the input subsidies. Generally speaking, input subsidies help agricultural producers earn more income than the market would otherwise provide them. They supplement market receipts with payments drawn directly from the state budget – taxpayers. It turns out, however, that not every hryvnia of the extra money that taxpayers pay to fund the subsidies would find its way directly into the income of the intended beneficiaries, – farmers and rural labor and population in general.

The greater share of that money ends up in the pockets of others. Agricultural producers in Ukraine buy most farm inputs from outside the farm and, as a result, input suppliers capture some, usually significant, share of the benefits. In fact, the government frankly admits that, for example, the program for partial compensation of machinery costs is designed to primarily support the domestic producers of agricultural machinery. Some of the benefits accrue to the landowners and to both hired and own labor (via, e.g. higher rental payments, higher salaries etc). Moreover, a significant portion of what taxpayers pay to support farmers disappears in dead weight losses due to the resource misallocation distortions caused by input subsidies. For example, in the presence of an agricultural machinery support program it is highly likely that (especially small) farmers will tend to buy more of the domestically produced agri-machinery (e.g. tractors, plows etc). At the same time, domestically produced machines tend to be of worse quality and lower productivity thus creating productivity losses for the farmers and for the entire sector. This would not happen under the scenario of no support program as there would be no such a ‘nudge’ from the government towards using the agricultural machines of lower quality.

Using the OECD (2002) methodology, we look at the incidence of the budget subsidies and show the major beneficiaries of the agricultural input subsidies in Ukraine. But, in contrast to the OECD approach, where they use aggregate data for the whole European Union agriculture, we distinguish the subsidies incidence between the four groups, small individual farms (up to 50 ha), medium individual farms (from 50 to 100 ha), large individual farms (100-500 ha) and corporate (medium and large) agricultural enterprises. All four groups of farms differ by the intensity of the use of various types of inputs. The main difference, however, is the share of own land in the total volume of cultivated land. Small individual farms tend to cultivate their own land, while larger farms (including the corporate ones) tend to cultivate mainly rented farmland (Nivievskyi et al, 2016).

The incidence of input subsidies is presented in the Figure 1: 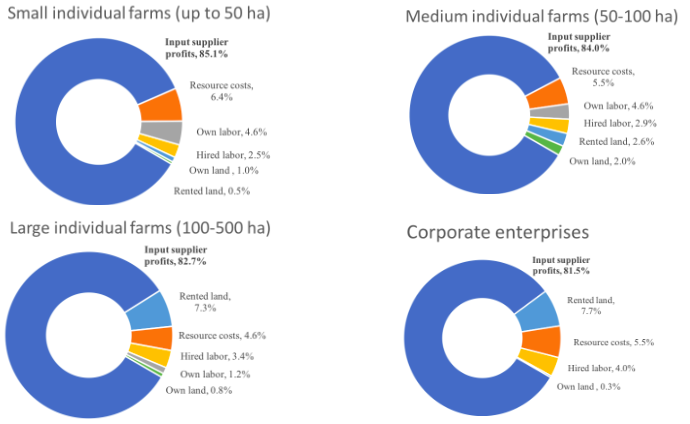 Several conclusions can be drawn from the above analysis:

In this paper we applied OECD (2002) methodology for assessing the incidence of input subsidies in Ukraine (or measuring transfer efficiency) using Ukraine-specific data. All the necessary input information for calculations (e.g. the values of supply and demand elasticities) were approximated based on the theoretical considerations and literature review. The ratio of subsidy to price of the input   in the model calculations was found as the total volume of subsidies relative to the total inputs production costs. This coefficient was calculated separately for different farm-sizes and corporate farms. Detailed information about calculations is available upon request.

Nivievskyi, O. (2016). ‘Impact of the Agricultural Tax Exemptions on the Sector Productivity’ article at VoxUkraine

Vice President of Economic Education, Associated Member at the Center for Food and Land Use Research

Researcher at the Center for Food and Land Use Research