Belt and Road Initiative: the impact of lower trade spending on welfare in Ukraine

This research by Trade+ provides economic assessment of the impact of the Belt and Road Initiative (BRI) on welfare in Ukraine. BRI is an initiative of the Chinese government aimed at developing transport infrastructure in Africa, Asia, Europe and the Middle East. The initiative consists of the Silk Road Economic Belt (the Belt) – the transcontinental passage, and the 21st Century Maritime Silk Road (the Way).

As to assess the impact of the BRI on welfare in Ukraine, the experts used the concept of the full gloal equilibrium based on the gravity model evaluated for different scenarios of transportation costs reduction from 5% to 30%.

Trade+ experts estimated that BRI will have a positive impact on Ukrainian exports and welfare. It is expected that a 15% reduction in transportation costs as a result of the BRI will lead to a 0.5% increase in GDP per capita. Although there are not many infrastructure projects in Ukraine, the country is expected to benefit even from those infrastructure projects implemented in other countries.

The researchers also compared the BRI impact assessment of the US-China trade war, which was modeled as a mutual increase in import duty rates of up to 25%. The trade war between the US and China will have a negative effect on prosperity through price changes and rising trade costs. The BRI initiative will help reduce this negative effect, but it is likely that it will not be enough to offset it. 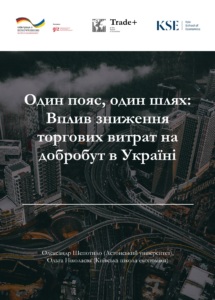